Corinth was located just outside of Athens. We learn about Paul's initial visit there from Acts 18:1-11:

After this Paul left Athens and went to Corinth. And he found a Jew named Aquila, a native of Pontus, recently come from Italy with his wife Priscilla, because Claudius had commanded all the Jews to leave Rome. And he went to see them, and because he was of the same trade he stayed with them and worked, for they were tentmakers by trade. And he reasoned in the synagogue every Sabbath, and tried to persuade Jews and Greeks. When Silas and Timothy arrived from Macedonia, Paul was occupied with the word, testifying to the Jews that the Christ was Jesus. And when they opposed and reviled him, he shook out his garments and said to them, "Your blood be on your own heads! I am innocent. From now on I will go to the Gentiles." And he left there and went to the house of a man named Titius Justus, a worshiper of God. His house was next door to the synagogue. Crispus, the ruler of the synagogue, believed in the Lord, together with his entire household. And many of the Corinthians hearing Paul believed and were baptized. And the Lord said to Paul one night in a vision, "Do not be afraid, but go on speaking and do not be silent, for I am with you, and no one will attack you to harm you, for I have many in this city who are my people." And he stayed a year and six months, teaching the word of God among them.
Acts 18:1-11 ESV 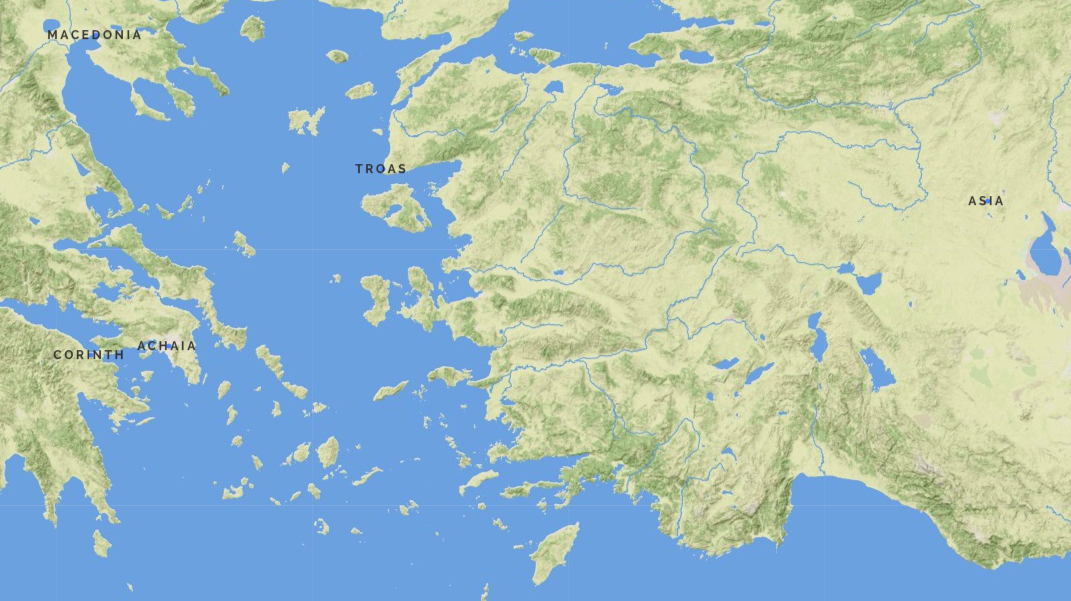 After founding the Corinthian church and then continuing on his missionary journey, Paul later gets a report of problems among the Corinthian Christians. This report leads to Paul writing the letter we know as 1 Corinthians. 1 Corinthians is filled with, among other things, instruction and reproof. The Corinthian Church's response to this letter was largely to reject Paul. After Paul initially left Corinth, a new group of "Super-Apostles" (2 Cor 11:5) came to town. They were well-off, well-spoken men who fit the leadership mold within worldly Greek culture. The Corinthians' rejection of Paul led to a "painful visit" (2 Cor 2:1) by Paul back to Corinth and a subsequent letter, which we don't have, that was fueled by much anguish and many tears (2 Cor 2:3-4). The response of many Corinthian Christians to these was to seek repentance and reconciliation (2 Cor 7:8-16). It was with this in the background that Paul wrote what we know as 2 Corinthians.

Leadership through the Cross

Within this opening prayer, Paul establishes that he wants to maintain an honest relationship with them. From this desire, we learn why the Corinthians had rejected Paul. The Corinthian Christians rejected Paul as their leader, because he did not seem like much of a leader to them. Within Greek culture, good leaders had money, reputation, and status. They were eloquent and beautiful people. Honestly, it's not really any different today. People were attracted to them, because of these qualities. Paul, on the other hand, was poor and usually homeless. He was not a gifted orator. Using the worldly standards of leadership, Paul is simply unimpressive.

Paul acknowledges that he does not fit the bill of a good Greek leader. He gets that. His response, however, is that these vaunted Greek leadership qualities are driven by a distorted value system. True Christian leadership is not about being impressive and awesome. Instead, true Christian leadership is about pointing people to Jesus as Lord and Savior. Christ is the impressive leader, and Christians are His servants. Echoing Jeremiah 31 and Ezekiel 36, Paul says that the credentials of a Christian servant-leader are written by the Holy Spirit on the hearts of fellow believers.

Paul contrasts the Old Covenant with the New Covenant using the metaphor of veiled glory. In the Old Covenant, Moses mediated between the Lord and Israel. His face was veiled to shield the Israelites from God's glory, and their desire for God grew veiled and dim. In the New Covenant, Jesus and His Spirit mediate between God and His people. Believers are being transformed inwardly by the work of the Spirit on their hearts. Their desire for God does not diminish but grows. We call this process of becoming more like Christ sanctification.

The Upside Down World of the Cross

This process of becoming more Christ-like changes the way that Christians perceive their world. The meanings of success and glory change for believers as a part of this process. These meanings change from their worldly definitions to better match the character of God as revealed in the cross of Christ. In Christ's cross, Christians see that God's glory and success are revealed through self-sacrifice and death. With love, Jesus gave up His glory to suffer and endure humiliation so that believers could be set free from sin and death. This self-sacrificing character of God is what Christians seek to mold their lives after. It is the Christian's cruciform way of living life that shows their Christian authenticity to others. It is a paradox, because to the world, this appears to be utter foolishness. To the world, success and greatness are the opposites of this self-sacrifice and love. This is why, in so many ways, the church lives in an upside down world.

One of the ways that Christians show that they are living upside down to the world's values is through generous giving. At this time, the Jewish Christians in Jerusalem were in desperate poverty and living through a famine. Paul was taking up a collection among the Gentile Christians to send to Jerusalem. The Christians in Macedonia, though they themselves lived in poverty, gave abundantly and joyously. Paul exhorts the Corinthian Christians, who are relatively well off financially, to do likewise. They should follow the example of their Lord Jesus Christ, who though "he was rich, yet for your sake he became poor, so that you by his poverty might become rich." (8:9) He also reminds them of the Exodus story when the Lord provided manna to satisfy everyone's need (Exodus 16:18).

Super Apostles, Paul, and the Way of the Cross

Paul concludes this letter where he began it by circling back to leadership and glory. These Super Apostles the Corinthians had been listening to are self-promoters. They are after fame and wealth, bragging about their biblical education and accomplishments. Paul, on the other hand, even though he exceeds them on these counts, rejoices in his own weakness and inadequacy. He does this, because he knows that Christ's power is made perfect through weakness. He then asks these Corinthian Christians to check themselves. Have they also been transformed by the power of the cross? Or, are they still caught up in the world's distorted value system? Do they, for example, aspire to humility and generosity? Do we?